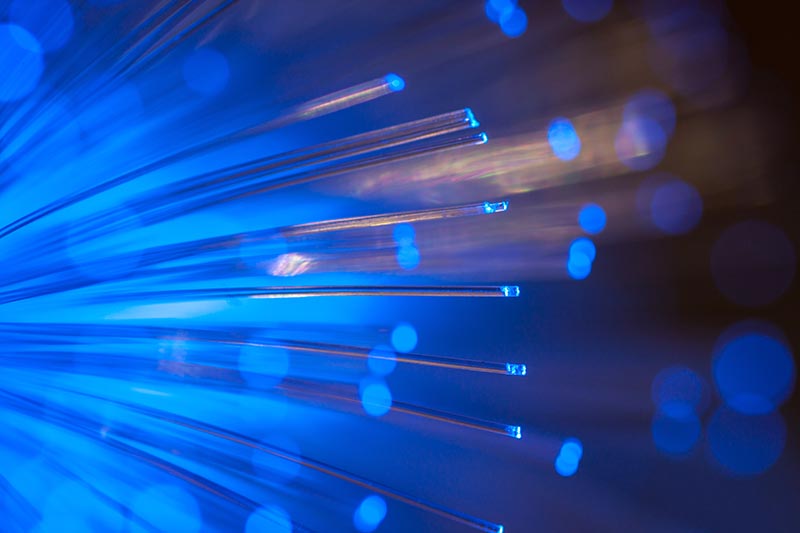 There are a whole lot of people that are excited by Fiber-based Internet coming to the Portland area, and rightly so. Fiber lines are a significant step up over the current methods used to relay Internet signals, and they further herald the arrival of gigabit Internet speeds.

Fiber isn’t the only way to achieve 1 Gbps speeds though. In fact, it’s not even the best way.

A Fiber optic line is a thin, flexible thread made of glass or plastic, which can be used to convey light from one end to the other. This light contains information, and makes up the basis for fiber-optic communication.

Fiber optic cables are an efficient way to transfer information. They allow transmission of data over longer distances than metal wires, are immune to electromagnetic interference, and operate at higher bandwidths.

There are some downsides though.

The downside of fiber

To begin with, installation of fiber lines can be costly and time consuming – not to mention complicated – especially when the fiber optic cables need to be installed in a crowded city.There are also limitations on the speed of the data based on the physical placement of the cables.

Fiber lines are also subject to wear and tear, so they degrade and require maintenance – they can also be cut, something that is happening more and more often. When that happens, it can require a massive amount of work to identify and replace the damaged lines.

While “Fiber Optics” has become a buzzword tied to the potential of faster Internet speeds up to 1 Gbps, it is not the only way to send information at that speed. A more and more common form of data transfer is through microwave communications, a process frequently known as Fixed wireless.

The upside of fixed wireless

Fixed Wireless is the process of sending information from one point to another using the microwave radio spectrum. The information is beamed from one central location to a receiving dish. It requires a line-of-sight connection which can potentially be an issue, but the dish is relatively small and easy to place. It is also up to 50-percent faster than fiber.

When it comes to fiber, the light it transmits is not sending the data at the speed of light, not even close. Light moves much, much faster than information sent over metal cables, but it is still limited by the material it is being sent on, as well as the path it takes.

There is also a higher rate of latency inherent in fiber-optic communication. Latency is the time it takes for a command to be received and a reply to be sent, and that latency in fiber communication increases over longer distances. By comparison, a microwave signal will have a latency of about 5.4 microseconds, while light on a fiber cable travels at 8.01 microseconds per mile.

When the delay is in the microseconds, it essentially feels instantaneous to humans. For certain businesses though, it can be measured in financial terms – and that time difference can equate to a loss of several million dollars.

To give a practical example, the New York and Chicago Stock Exchanges need to be in constant communication, with trading information traveling between the two. Electronic trading makes up between 60-70-percent of all the daily volume at the NYSE. When computers are set up to make millions of trading decisions in a fraction of a second, a process known as “High Frequency Trading,” even a micro-delay is costly.

“A one (1) millisecond advantage in trading applications can be worth $100 million a year to a major brokerage firm,” Information Week reports.

In 2013, the record for the time it took to send information from suburban Chicago to New Jersey was set using fiber-optic cables at 12.98 milliseconds. Compared to previous methods of passing on information, this is blisteringly fast. That’s the equivalent of the information traveling the 1632 miles roundtrip at 226.3 million mph. Sounds awesome, right?

Well, using a microwave-based relay network, the same information made the trip in 8.23 milliseconds, or the equivalent of 356.9 million miles per hour.

When each millisecond can cost $100 million per year, a difference of 4.75 milliseconds is staggering.

One of the reasons for the speed difference is the distance the information has to travel. In the case of microwave communications, the data simply needs to go from point-to-point in a straight line. This can cause some issues when something like, say, a building gets in the way, but properly positioned signals can beam information over huge distances. With fiber optic lines in a city, the cables are forced to wind their way around and through the buildings, and each turn slows down the light signal a bit.

In an outdoor environment, microwave signals can go right over things like rivers and mountains, while a fiber optic line will generally need to follow existing roads, bridges, and previously installed routes lines.

Because of that, microwave communication will always be potentially faster.

The installation of fiber optic lines can be difficult and costly. The best case scenario is that fiber lines are installed into a building during the construction phase, avoiding a potentially massive retrofit. For a home, the installation is a little easier – assuming the home in question is in an area with fiber lines already in place.

With microwave communications, all it takes is a receiver dish and a nearby transmission tower. The installation will be a bit more intricate for a business, but less so than fiber. For a house, it’s just a matter of finding the right place to put a dish.

Unless you live in one of a handful of specific cities in the U.S., wired gigabit service isn’t possible yet. It requires fiber-optic cables, something that many U.S. cities don’t have yet. Blame the costs, blame your local city council, but the reality is that the U.S. is falling way behind many other industrialized nations when it comes to the speed of our Internet.

Like fiber-optics, microwave and fixed wireless communication require upgraded equipment to send gigabit signals. Unlike fiber though, this generally requires something relatively small, like a new transmitter and dish. It does not require a new infrastructure before it goes active, nor does it require a massive citywide effort to install. Because of that, gigabit Internet service is already here for many metro areas (including Portland) through fixed wireless microwave communication.

The pricing is about the same as well, and in some cases cheaper.

Most major cities in the U.S. have multiple options when it comes to Internet providers. Some come with baggage though.

Fiber lines tend to be the province of large national and international corporations that have the funds to install a new infrastructure. It’s ironic that signing up with a corporation that invested in your city means you will actually be sending your money away from the local economy.

Many companies that offer fixed wireless communications, however, are locally based. Their customer service is typically local as well, so supporting that company means you are supporting the local economy.

Microwave service is not available everywhere, and fixed wireless communications will also vary speeds by location. If you are in the service area though, there are a lot of reasons to consider cutting the cable and going wireless.

How routing works with your Internet connection

An overview: Setting up video streaming for events.