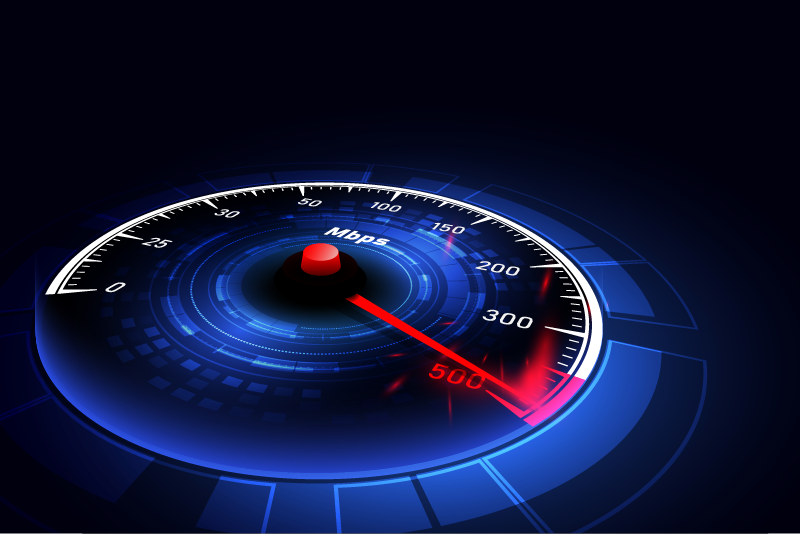 When it comes to things like speed, Americans love to go faster. Even with highway speed limits of 70 mph, cars are being built that can go double that off the factory floor. We love the ability to go that fast, even if we never use it. With the Internet though, speed is a little different.

America is badly behind the curve when it comes to national Internet speed averages. The U.S. is currently 12th on the list of fastest countries. To put it in perspective, the U.S. average is 11.5 Mbps. The top ranked country, South Korea, has an average of 25.3 Mbps.

The U.S. infrastructure is improving though, with more service options coming along than ever before. Gigabit speeds are even available in multiple areas, with more on the way.

Internet speed is important, but many people don’t know exactly what that means. Sure, faster is better, but do you really need a gigabit service? Do you need 100 Mbps?

Deciding on which plan is right for you may be as simple as selecting the fastest option, or it may be more complicated than that. In either case, it’s good to know where you stand, and what you need.

It’s a good habit to get into to regularly test your Internet speed. For many of us, Internet speed is something we can’t easily equate because there’s no frame of reference. Knowing your speed – and if it is working for you or not – will help you understand what you need.

Depending on your usage, download speed is going to be far and away the most important stat. That is what (partly) determines how quickly you receive information from the Internet. It’s the measure in which you consume information online, which is why you’ll typically see Internet packages that greatly favor download versus upload speeds.

Upload speeds determine the rate at which you can send information from your computer. This includes emails, posting videos, and more. Unless you are constantly providing content online (if so you should consider switching to business packages), your upload usage should pale in comparison to your download.

The easiest way to test your current usage is to head over to a site like speedtest.net. That site uses a simple system to determine how fast your signal is, then it displays the results.

Generally, the speed you are receiving will be a little slower than the advertised speed of the package you are paying for. A 10 Mbps package, for example, means “up to 10 Mbps,” so your average will be a little lower.

This is true regardless of provider, but when you test your Internet speed, if you see a huge drop off you may want to contact your provider and see if there is something going on – a bad modem, for instance, can limit your speeds. Wi-Fi speeds will almost always be significantly slower than Ethernet speeds as well, so factor this in.

Which package is right for you?

1-3 Mbps: This plan is for people that need the bare minimum. You’ll be able to surf most websites, watch some videos, and do things like send emails. You’ll have some issue with HD video, streaming content, and gaming will be slow. This plan is best for a single user, as multiple people fighting for the same bandwidth will slow things down.

6–10 Mbps: 4 Mbps is considered by most to be the minimum speed you need to successfully and consistently access and utilize HD video content through sites like Netflix and YouTube, but 6 Mbps makes things much easier. Online gaming is also good for this range, but if multiple people are using the same connection it will slow everything down.

10-15 Mbps: At these speeds, you should be able to access most content without issue and play games online without any noticeable delay. You’ll also be able to utilize things like video conferencing, but this speed range can becoming bogged down when multiple users put a lot of strain on it.

15–20 Mbps: These plans are made for people that frequently use the Internet for everything from entertainment to work. These speeds are fast enough to handle almost every demand with a little extra left over. You will have issues with Ultra HD though. It’s also designed for households with multiple users trying to access content all at once, although too many users can throttle speeds.

25 Mbps: This is becoming the new normal for many. At these speeds you can stream videos, game without issue, and have multiple users all on the same connection. This is a good plan for people that rely on WiFi, although there will be occasional slowdowns. If you want to stream Ultra HD, you’ll need this plan at least, but you may want to go higher.

100 Mbps: Federal Communications Commission created a “National Broadband Plan,” with the goal of having at least 100 million homes with affordable access to speeds of at least 50 Mbps by 2015, and 100 Mbps by 2020. With that higher speed, you can have multiple people video conferencing, stream Ultra HD videos, and game. More importantly though, you’ll be ready for whatever online content may come next.

1 Gbps: With 1 gigabit speeds, you can do it all – stream video, game online, engage in group video conferencing, and more. This is the plan for people that work and play online, with multiple people also working and playing online at the same time. This plan is overkill for many online services, but that will change soon. When things like Ultra HD virtual reality content begins to stream consistently online, this plan will be ready.

If you only use the Internet for certain things, you should tailor your package around those services. Here are some of the speeds you’ll need for your favorite online functions.

Gaming: Although you can connect and play most online games with as little as 1 Mbps or less, 5-10 Mbps is recommended. When it comes to gaming, it’s really about latency more than speed – check your ping rate (speedtest.net will show you that stat). If you have multiple people on the same broadband connection though, you’ll need more speed.

Streaming Video (Netflix, Hulu, etc): Netflix recommends an absolute minimum of 0.5 Mbps, but for HD quality video you’ll need at least 5 Mbps. Ultra HD isn’t widespread yet, but it is coming and 25 Mbps is recommended.

Video Conferencing: Although you can get away with as little as 1.5 Mbps for video conference calling, Skype recommends 8 Mbps for a group call of 7 people or more. You’ll need more if you intend to do anything else while on the call though.

Portland Gigabit service is already here, and why it matters